Today, a portrait of one of the deadlier OMW (Obscure Marvel Women) of the OMU (Original Marvel Universe). 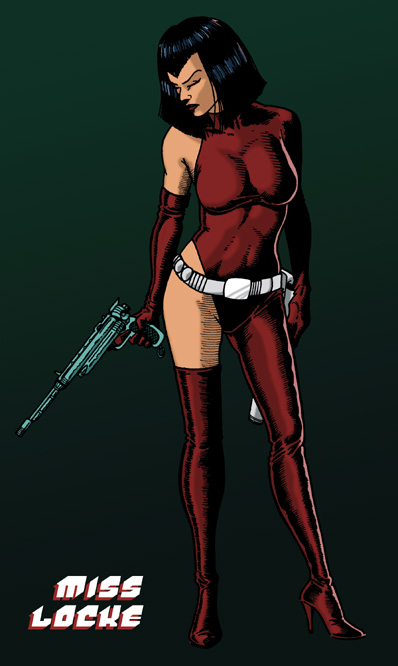 Little is known of the history of the femme fatale who calls herself Miss Locke. Sometime prior to 1969, she became personal assistant to the flamboyant master assassin known as Arcade, helping him operate his Murderworld installations in various parts of the globe. She appears to be of at least partial Asian descent and has demonstrated some proficiency in the martial arts, although she has a clear preference for long-barreled guns. Since she specializes in procurement—capturing, kidnapping, and imprisoning her victims—it is likely that “Miss Locke” is an alias.

Each February, in honor of Arcade’s birthday, he and Miss Locke hold a duel, in which she has 24 hours to kill him any way she can. Despite the respect she has for her employer, she makes every effort to end his life, knowing that if she succeeds, Murderworld and all its resources will be hers alone. However, each year Arcade manages to survive by a narrow margin, thus proving his superiority. They celebrate the resolution of their conflict with a champagne toast.

In early 1969, Miss Locke was present aboard Arcade’s luxurious private 747 aircraft when he accepted a contract on Brian Braddock, an English college student whom Arcade’s clients, representatives of the Maggia, believed might be their nemesis Captain Britain. If so, he would be the first super-powered victim of Murderworld, and they eagerly accepted the challenge. In the course of their preparations, Miss Locke kidnapped Braddock’s girlfriend, Courtney Ross, and took her to the original Murderworld, located beneath the streets of New York City.

However, when Arcade happened upon Captain Britain himself, in the company of Spider-Man, he decided on a change of plan and captured both heroes. Unfortunately, Spider-Man escaped the complex’s various deathtraps to wreak havoc on its internal systems. With Murderworld crippled, Spider-Man and Captain Britain rescued Ross and escaped. Miss Locke was pleased that Arcade accepted this unaccustomed defeat with good humor, announcing that they would build a bigger and better Murderworld in another location outside the city.

Within a matter of months, the new installation was completed, located deep beneath a landfill next to an abandoned amusement park in the Bronx. Then, Arcade accepted his second contract involving superheroes. This time the targets were the X-Men, and the clients, “Black Tom” Cassidy and the Juggernaut, were able to provide Arcade many details about the mutant heroes, including the location of their secret headquarters.

During this time, Arcade also entered into an agreement with an unscrupulous businessman named Amos Jardine to assassinate Spider-Man. Both Arcade and Miss Locke relished the thought of a rematch with the web-slinger, who had proved to be a worthy opponent.

Within a few weeks, Murderworld was ready for its latest victims, and so Miss Locke, Arcade, and their technical advisor, Mr. Chambers, set about capturing the X-Men, along with some of their friends. Once again, Murderworld proved no match for its super-powered prisoners, and Nightcrawler even managed to teleport into the control room and punch Miss Locke in the face. Realizing that their scheme was unraveling, Arcade aborted the mission and ejected the X-Men from the complex.

Then, to add insult to injury, Amos Jardine cancelled the contract on Spider-Man, saying he had found another assassin to do the job more cheaply. When Jardine demanded a refund of his deposit, Arcade rebuffed him, and Miss Locke found it necessary to subdue Jardine with her martial arts skills. The pair was amused later that night when Jardine’s bargain-basement killer made a total hash of the job and was defeated by Spider-Man and Nightcrawler.

The following spring, when Arcade ran afoul of the super-villain Doctor Doom, Miss Locke blackmailed the X-Men into rescuing him from Doom’s castle in upstate New York, knowing she was probably sending them to their deaths. She secured the heroes’ cooperation by kidnapping several of their friends and family members, including Moira MacTaggert, John and Elaine Grey, Stevie Hunter, Amanda Sefton, Candy Southern, and even Illyana Rasputin, whom she brought all the way from Siberia. However, while the X-Men confronted Doom, Miss Locke was unable to prevent the hostages from being rescued by a reserve team of mutant heroes, made up of Iceman, Havok, Polaris, and Banshee. Once again, Murderworld was crippled, but Miss Locke and Mr. Chambers got away, as the X-Men could not press charges without revealing too many of their own secrets.

When Arcade returned, safe and sound, he and Miss Locke discussed their poor track record with super-powered victims and decided not to accept any more contracts on superheroes unless there was a personal grudge involved. They continued to use Murderworld to kill ordinary men and women, and also found tremendous profit in renting the installation out as a training ground for super-villains. Arcade used the money to build new Murderworld installations in other parts of the world, including one near London, England.

In the years to follow, Miss Locke assisted Arcade in a number of grudge-matches against members of the X-Men, including Nightcrawler, Wolverine, Colossus, Shadowcat, Rogue, Dazzler, Iceman, and the Beast. Later, they pitted themselves against the Britain-based superhero team Excalibur, which included Nightcrawler and Shadowcat as well as their old enemy Captain Britain.

Over the years, both Miss Locke and Arcade successfully eluded law-enforcement authorities around the world, and so, despite her countless crimes, Miss Locke does not even have a criminal record.