During the first two years of her superhero career, the Scarlet Witch saw a number of minor modifications to her costume as it evolved into the “classic” version she would wear for many years afterward and be best known by. I noticed these changes while working on my Scarlet Witch Chronology and decided it would be fun to take a closer look.

The original Scarlet Witch costume was given to Wanda by Magneto when she joined his so-called Brotherhood of Evil Mutants. Her twin brother, Pietro, was given a costume of his own and christened Quicksilver. Wanda wore this outfit during the five months she was a member of Magneto’s team and continued to wear it when she and her brother subsequently joined the Avengers.

After a few months, following an escape from the clutches of Doctor Doom, Wanda decided to stop wearing the waist-cinching belt Magneto had given her, creating a sleeker, more streamlined look. However, at the same time, she realized that her mutant powers were fading, leading her to take a leave of absence from the Avengers just a week or two later.

In search of a way to restore her powers, Wanda and Pietro returned to their home country, Transia, and the environs of Wundagore Mountain, where they were born. There, they met an eccentric scientist, who devised a series of diathermatic treatments that seemed to be effective. Excited by the prospect of soon returning to the Avengers, Wanda redesigned her costume’s headdress, making it much less cumbersome.

Unfortunately, Wanda and Pietro were almost immediately captured by an alien invader and held prisoner aboard his flying saucer for many weeks before being rescued by the Avengers. The twins then returned to active duty for a few months, only for Wanda’s powers to fade again. They were captured by Magneto and held on his island fortress in the Atlantic until finally escaping in the aftermath of a battle involving the Avengers and the X-Men. Believing the Avengers thought they had rejoined Magneto’s terrorist group of their own free will, the twins went into hiding for the summer with their former Brotherhood teammate the Toad, and, bereft of her powers, Wanda only donned her costume again in the autumn when they were attacked by mutant-hunting Sentinel robots. The Sentinels were defeated by the X-Men, enabling Wanda, Pietro, and the Toad to return to Central Europe aboard one of the robots’ airships. There, while searching the region’s occult libraries, the trio received brand-new costumes.

Wanda was suddenly kidnapped by the extradimensional barbarian king Arkon and taken to his world of Polemachus, where he declared his intention to make her his bride. Arkon outfitted Wanda with a metal belt that locked around her waist with a jeweled clasp, his version of an engagement ring. Though the Avengers rescued her from Polemachus and defeated Arkon, Wanda waited several days before having the belt removed. 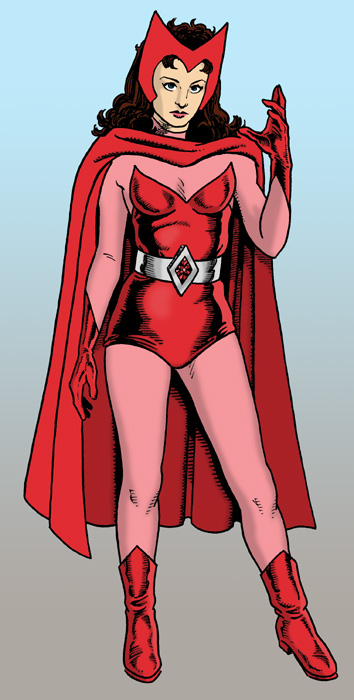 However, the next day, Wanda took to wearing a scarlet leather belt buckled tightly around her waist, apparently still dealing with the emotional turmoil stirred up during her sojourn on Polemachus. She also replaced her gloves and booties with more substantial gauntlets and boots, and sported this look during the Avengers’ battle with the Lethal Legion.

Following this skirmish, Wanda stopped wearing a belt, settling into the standard costume she would wear for the better part of the next decade. 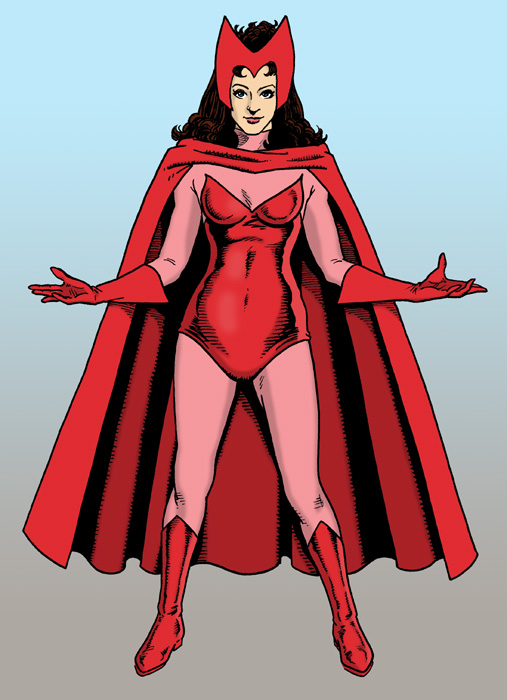